To celebrate International Women’s Day, we explore the life of Mary, Duchess of Bedford - one of hard work, care and an appetite for adventure.

Mary, Duchess of Bedford became known as the ‘Flying Duchess’ after she took up the pastime of aviation at the age of 60. Her remarkable flying record coupled with her untimely death in a plane crash led the obituaries to focus on this one part of her life. However, as noteworthy as her achievements in the sky were, it was only later when press notices were updated and enlarged upon that people began to fully realise that an exceptionally notable women of their generation had died.

The youngest of four children, Mary was educated at Cheltenham Ladies College before joining her parents in Lahore where her father’s ministry had been established.  It was here that she fell victim to typhoid fever, an illness to which she attributed the deafness that affected her in later life.

In 1888 Mary married Lord Herbrand Russell and she gave birth to one child, Hastings, 11 months later.  In 1891 Lord Herbrand’s father died and two years later, on the death of his older brother then tenth Duke, Herbrand succeeded to the Dukedom and his and Mary’s life at Woburn began.

It was here that the Duchess’ outstanding achievements and record in the sphere of hospital work commenced.  Mary’s interest in medical work dated back to her school days when she listened with keen attention to the Red Cross lectures given at Cheltenham Ladies College.  Her attendance at these lectures was not authorised as she was not a member of the Red Cross class. However, by sitting near the open door and giving much divided attention to her own work, she was able to hear enough of the lectures to rouse her youthful enthusiasm for the subject.

All this interest took practical shape in 1898, when she opened the small Cottage Hospital in Woburn Village.  Mary served in every department from floor scrubber to theatre sister and was never too busy or too proud to undertake even the most mundane of tasks.

After five years the original hospital building was replaced by a model hospital designed by the Duchess herself.  The new model Cottage Hospital, medical and surgical, opened to meet the needs of the neighbourhood in 1903. It continued in that service under the Duchess’ supervision until the outbreak of war.  It was not until 1914 however, when she was nearing 50, that she saw the chance to attain her goal and strenuously embraced it.

Her diary from September 7, 1914 reveals: ‘Admitted the first soldiers from Bedford to the Cottage Hospital.  I little thought when we built it ten years ago that we should ever see the Red Cross flag flying over it.’

Under the Duchess’ supervision, the riding school and tennis court at Woburn Abbey were converted into a second and much larger hospital to hold 80 beds, an operating theatre, X-ray room, kitchen bathers and offices.  Later, four smaller rooms were added to provide a further 20 beds.  A long veranda in the Abbey garden known as ‘the covered way’ was used as an open-air ward, a facility that greatly benefited patients suffering from septic wounds.

A few months after the outbreak of war, the Abbey Hospital began taking wounded men direct from the Front. In these early days the Duchess served her apprenticeship as a probationer in the wards, starting work each day at 5.45am.  She became a highly skilled radiologist and was in sole charge of the X-ray department, conducting examinations, keeping records and developing the plates in the darkroom. 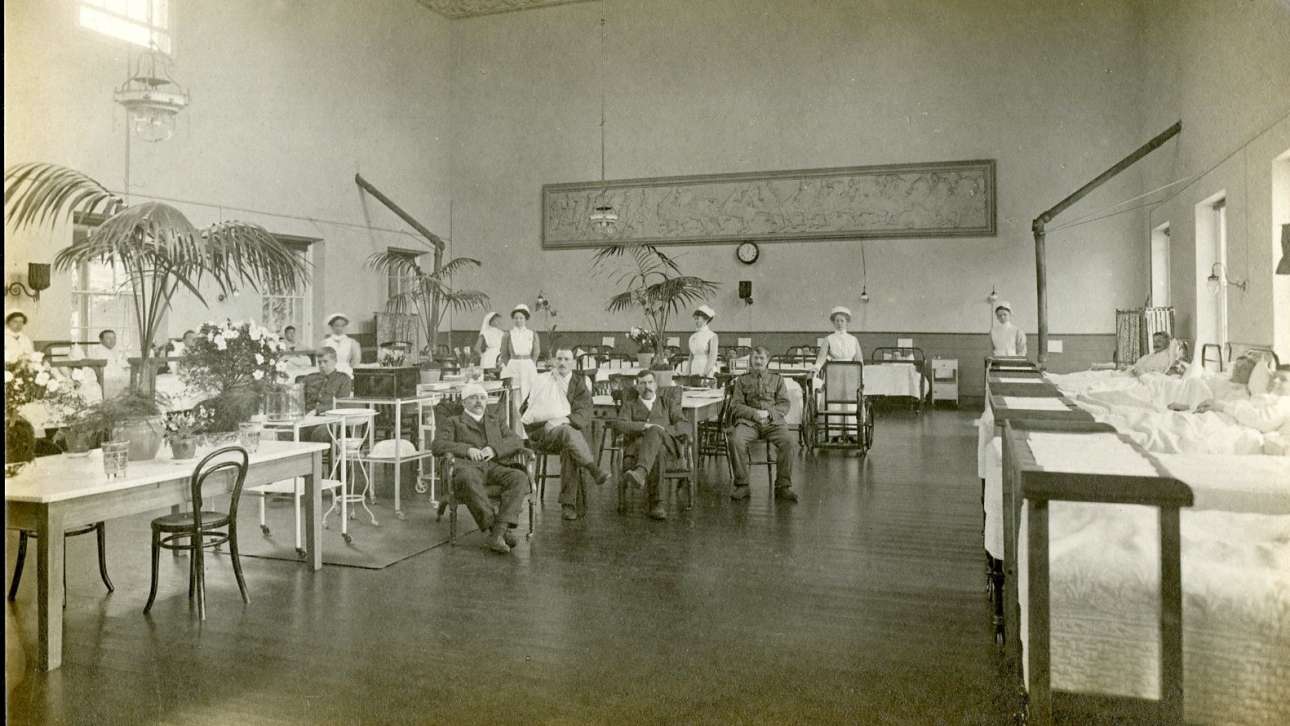 In 1917 Mary undertook the still more responsible post of surgeon’s assistant at the Abbey Hospital which meant preparing for and assisting at about 12 operations a week in addition to her varied duties as Officer in Charge at both hospitals.

Among all these serious duties, the Duchess did not neglect the provision of amusement for her patients.  A cinema was put up in the Abbey gymnasium, entertainers engaged, concerts given and plays acted.  The Duchess always showed a special concern for the comfort and happiness of her nurses, who were accommodated in the Abbey, recognising the debt she owed them for the success of the war work.

The Order of the Red Cross

When Armistice Day brought the Great War to an end, the Duchess wrote to the Army Council to request that she continue this work. Subsequently, Woburn Hospital was converted into one of only 12 military orthopaedic hospitals for the aftercare of the wounded.

Mary received, along with hundreds of other nurses, the Order of the Red Cross, 2nd class; the 1st class being reserved for professional nurses.

Eight years later, the war hospital had long since been closed and Mary had become a member of the Women's Tax Resistance League to protest the disenfranchisement of women during the British women's suffrage movement, she was created a Dame of the Order of the British Empire.

Up in the air

Flying came late into the Duchess’ life but at an important juncture.  Her deafness had grown constantly worse and she began to realise that one day she would be cut off from much of her usefulness in hospital work.  Thus, at the age of 60, she took her first flight from Croydon to Woburn on June 17, 1926. 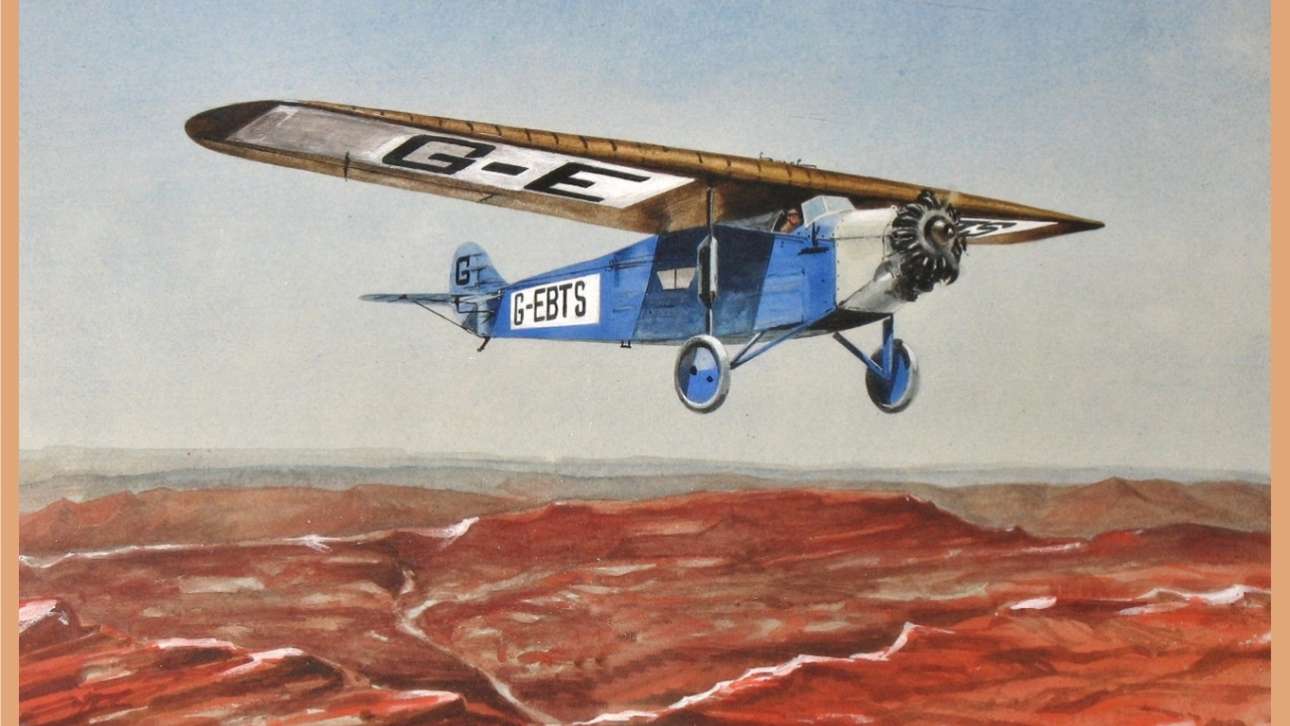 It was just two years  later when Mary embarked on the first of her historic flights to India in the Princess Xenia (a Fokker monoplane), wholly realising the opportunities that flying offered her.

On Monday March 22, 1937, with almost 200 hours of solo flying time logged, the 71 year old Duchess of Bedford took off from the park at Woburn Abbey.  When she hadn't returned after an hour and a half the Duke became very concerned and contacted the chief of Bedfordshire police who put out calls to neighbouring constabularies. But nothing was seen of her nor the plane.

It is thought that she might have flown out over the sea by mistake and ran out of fuel.  What is known for sure is that she and her De Havilland Gipsy Moth disappeared together into the North Sea.  The airplane’s struts were washed up at Yarmouth, Gorleston, Lowestoft and Southwold. Her body was never recovered.

For the latest updates